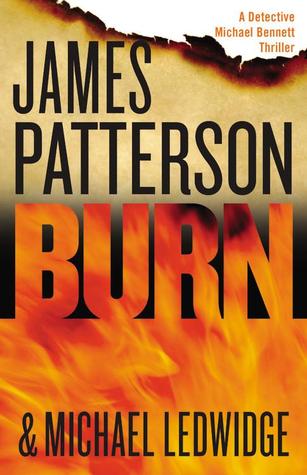 The first book I read in October was Burn by James Patterson and Michael Ledwidge.  I haven’t read too many of Patterson’s Michael Bennett series.  I won this copy from the James Patterson website and wanted to read it during the month that I planned to read mystery books.  I have mentioned in previous posts that I love the Women’s Murder Club series from James Patterson so I was excited to get into this.  Unfortunately, I was extremely disappointed.

Synopsis from Goodreads: Detective Michael Bennett finally returns to New York City—and to the most unsettling, horrific case of his career.

At last, Detective Michael Bennett and his family are coming home to New York City. Thanks to Bennett, the ruthless crime lord whose vengeful mission forced the Bennett family into hiding has been brought down for good.

Back in the city that never sleeps, Bennett takes over a chaotic Outreach Squad in Harlem, where he receives an unusual call: a man claims to have seen a group of well-dressed men holding a bizarre party in a condemned building. With no clear crime or evidence, Bennett dismisses the report. But when a charred body is found in that very same building, he is forced to take the demented caller seriously—and is drawn into an underground criminal world of terrifying depravity.

My Thoughts:   The story line involved cannibalism and disgusting details that were a real turn off to me.  The back story about Michael Bennett was there but the main plot was something that I would turn away from if I had seen it in the synopsis of another book.  I did finish this book as it was a quick read.  I do not think that I will be picking up any other books besides the Women’s Murder Club.  I gave this book 2 crowns.