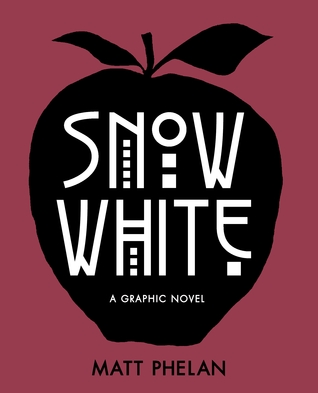 The scene: New York City. The dazzling lights cast shadows that grow ever darker as the glitzy prosperity of the Roaring Twenties screeches to a halt. Enter a cast of familiar characters: a young girl, Samantha White, returning after being sent away by her cruel stepmother, the Queen of the Follies, years earlier; her father, the King of Wall Street, who survives the stock market crash only to suffer a strange and sudden death; seven street urchins, brave protectors for a girl as pure as snow; and a mysterious stock ticker that holds the stepmother in its thrall, churning out ticker tape imprinted with the wicked words “Another . . . More Beautiful . . . KILL.” In a moody, cinematic new telling of a beloved fairy tale, extraordinary graphic novelist Matt Phelan captures the essence of classic film noir on the page—and draws a striking distinction between good and evil.

My Review:
I received an E-ARC from the publisher through Netgalley in exchange for an honest review.
I was very disappointed in this “retelling” of Snow White.  It was not so much a new story but just a change of a few details.  The illustrations were nice but the few lines of text were ridiculous.  I do not think that this graphic novel is worth the read.  I rather recommend the illustrated version of Snow White that I reviewed earlier this year.
I gave this 1 crown.